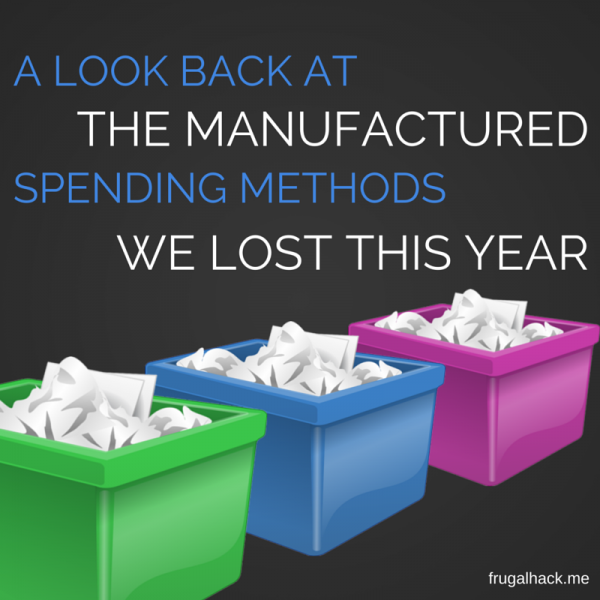 Manufactured spending techniques come and go, almost on a daily basis, but that doesn’t mean we should simply forget the good times. Some of those techniques were with us through thick and thin, through cashier after cashier and they never complained. They just trudged on, despite their overuse. And what do we do to repay their efforts? We throw them in a drawer and forget about ’em.

With the new year upon us, there’s no better time to look back at the manufactured spending methods we lost this past year and remember the good times we had with them.

It took one weekend March to bring the Vanilla Reload game (at CVS) to its knees. When this story broke, some people thought it was an April Fools joke while others went hog-wild and bought thousands of dollars worth of VRs. I decided to buy my three Serve cards worth of Vanilla Reloads ($15k) for April, a few days early. I’m glad I did, because on April 4 CVS did end up going cash only for all the good stuff (minus PPMCs and OVs)!

This year we lost two versions of Visa Buxx, TD Go and US Buxx. Well, we didn’t actually lose them. TD Go simply removed the ability to fund it with a non-TD bank CC and US Buxx stopped allowing new sign-ups. US Bank still allows new cards to be printed for existing sign-ups and they are still very loose with CC loads, but unfortunately only existing users can take advantage of it.

Amex is very hot and then cold, yes and then no, in and then out, up and then down with portals paying out for their gift cards. Around September, Amex decided they didn’t want to offer portal payouts anymore. In retrospect, maybe one of the engineers accidentally clicked the portal “off” button and realized it a month later, because that’s when portals started paying out for Amex gift cards again. Who knows. Either way, at least it didn’t last forever!

2014 was the last year of the Ink Bold. Chase decided to axe it in favor of the Ink Plus, which was likely due to the similarities of the cards. For whatever reason, I prefer the look of the Bold to the Plus, but other than that, the Plus is just fine.

This year we lost ISIS. No, not that ISIS, but ISIS wallet. Well, okay, we didn’t really lose it, it was just renamed to “Softcard” – which isn’t much better of a name really.

Evolve Money isn’t gone either, but it has devolved so much that the original version differs vastly from the current one. In the golden age of Evolve, you could pay any biller in as many payments as you wanted (up to $1,000 a day) without issue. Now, you can send one payment to each biller per month. But, wait! You can now pay bills with your Discover card right? Yes, unless its a mortgage or auto payment. So, that kinda sucks too. I know, I’m a debbie downer.

Remember when Staples started selling Visa gift cards online and you could earn cash back by shopping through a portal? Yeah, that was sweet… and short lived.

The Suntrust Delta debit card was one of the best ways to manufacture Delta Skymiles with a debit card, while it lasted. In fact, it was one of the last mile earning debit cards available. The only one I know of that’s still around is UFB Direct’s Airline Rewards Checking.

Plink was an awesome program while Staples and Office Depot were on the list of participating retailers. Once they both expired from the program, things kind of went downhill. Then after a few months of  no one talking about the program, they shut their doors. This was an overnight thing, so many people lost their Plink points. That kind of sucked, but if they weren’t making any money, they couldn’t pay anyone.

Visa SavingsEdge is still up and kicking, but one of their most useful partners (Staples) has left the program. Now we have to pay the WHOLE $6.95 fee for our gift cards. It’s an outrage! Hopefully, Visa SavingsEdge adds new partners in 2015 that the points and miles world can take advantage of.

The famous Amazon Payments was lost this year as well. This was one of the most reliable, easy to use manufactured spending methods we’ve ever had. It didn’t matter if you had an extra gift card laying around or you just wanted to complete a minimum spending requirement in your underpants, Amazon Payments was accommodating. RIP AP…

Did I miss I any manufactured spending methods KIA?

We Need Your Help #FightForEzra