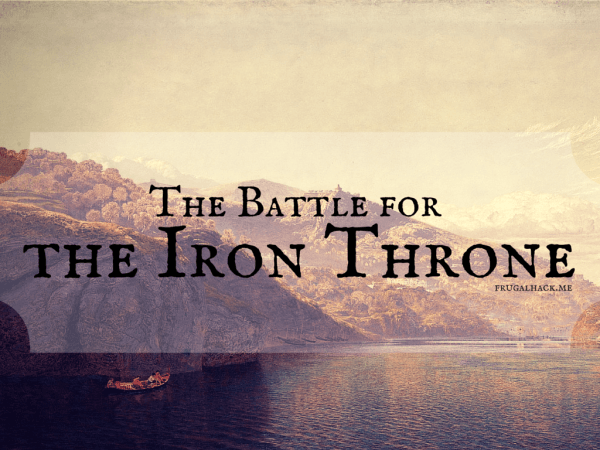 The Battle for the Iron Throne

To the banks, we’re all money signs. Nothing more nothing less. In Westeros, we’d be the Iron Throne of the realm with each bank being a contender for that throne. The only difference in this case is that it doesn’t necessarily need to be a monogamous relationship. Every bank can sit the throne as long as it’s a mutually beneficial relationship!

Let’s take a look at the contenders…

In honor of Game of Thrones’ fifth season starting this weekend, I figured it was time to bring two of my favorite things together: A Song of Ice and Fire and the world of credit cards. Is that even possible, you ask? Of course it is! 🙂

Chase, the bank above all banks, is an entity you do not want to be on the wrong side of. After all, if you’re cut off from the herd, you lose out on some of the industries best credit cards. A similar thing could be said about Tywin Lannister, the man who ran the realm even though he didn’t sit the throne. However, if you’re not in his good graces, you won’t just miss out on the best gold dragon credit cards Westeros has to offer, you’ll also lose your head. No Bueno.

American Express, sometimes referred to as Daenerys Express (because of the dragons), is a soft-hearted, generous bank. They offer some great sign-up bonuses throughout the year such as the 100k/150k Platinum bonus and the 75k Gold bonus and their perks are fiery hot. In addition to all that, they have a secret weapon that other banks can’t even compete with: Amex Offers.

Don’t be fooled by her beauty (and perks) though. If you wrong her or overstep boundaries, she isn’t afraid to lay down the hammer and sack your city (Astapor anyone?)… or at least give you a financial review, which is anything but fun.

Bank of Lannister, err Bank of Cersei, err Bank of America has some of the worst credit card offerings in the business. Well, they’re not all bad (Alaska Airlines), but who wants a Royal Caribbean or Norwegian co-branded card? Not me! Bank of America is not fit to rule!

Discover is a well-meaning, underdog that’s often overlooked because it’s not as flashy as other banks. They don’t offer many cards, but the ones they do offer are good, despite their manipulative nature. Maybe not so much manipulative as crafty, but calling their “new” currency “miles” is a bit of a stretch. At least they have good intentions right?

US Bank – Stannis “The Mannis” Baratheon

US Bank is stern, but fair (just ask Davos). By that I mean they offer a lot of great cards offering decent sign-up bonuses, good earning opportunities, and decent benefits, but if you have too many credit inquiries or they think you’re gaming the system they’ll deny your application(s). The best way to avoid  having your apps declined, is to freeze your IDA and ARS reports.

Citi is a very generous bank. In fact, they’re so generous that they’re often taken advantage of (eg. AA Exec, AA Plat, Churning is general). Regardless, they’re still one of the strongest  banks in the industry, according to Wikipedia. I think they might actually know something, despite what Ygritte says.

Smart, cool, and adaptive, she can take anything thrown at her and roll with it. Not only that, but she’s caring too. If it wasn’t for her, Gendry and Hot Pie would still likely be stuck as Bolton’s servants or at the very least dead. How is Barclaycard Arya you ask? Well, the same way Arya saved those two misfits, Barclays saved American Airlines the trouble of acquiring new customers thanks to their generous US Airways card these past few months. A stretch maybe? Probably, but that’s alright. 🙂

Varys and Capital One are sneaky little buggers. They seem fine on the outside, like they’re looking out for your best interests, but really when you sign-up for one of their cards, they will pull your credit report from all 3 bureaus. Is that really the best thing for you? Absolutely not.

Do you have any Wells Fargo cards? No? Me either, even though they tried getting us to take them seriously with their Propel cards, it didn’t work. Someone should just pour a pot of molten gold on their building and call it a day. Actually, I think that may have already happened considering they have $1.69 trillion worth of assets.

There is only one thing we say to theories, “Not today.”

The Intermediate Guide to Manufactured Spending

Update On My 100,000 Membership Rewards Challenge

What to Do with 100,000 Membership Rewards Points