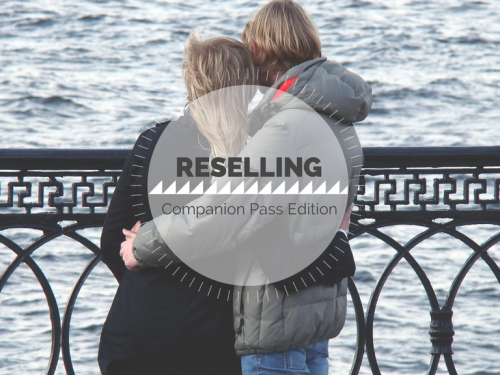 I’ve talked about reselling for a profit before, however, there’s more to it than just money (I’m sure you can guess where this is going). Reselling can be useful for hitting minimum spending requirements and taking advantage of portal rewards, in addition to earning extra cash. In fact, I earned my Southwest companion pass and completed two minimum spending requirements by reselling. What is it?
The Southwest Companion Pass gives you the ability to have one companion fly with you for *free for the rest of the current year and all of the following year. That means you basically get BOGO Southwest tickets for 1 – 2 years when you earn a Companion Pass. It doesn’t matter if you pay with points or cash, your companion will fly *free for the entire time you have the Pass.

Requirements
You need to earn 110,000 points or fly 100 one-way segments in one year to earn a Companion Pass.

*You still need to pay taxes on your companion’s ticket, but it usually doesn’t cost more than $10.

In June of 2014, Southwest ran a great promotion where you could earn 8+ points per dollar at 8 different retailers. The best of those offers was on June 26 when they offered 10 points per dollar at Sears. There were higher point earning retailers, such as 18X points at eBags and 20X at magazines.com, but what made Sears the best was the ability to buy gift cards and still earn 10X points.

10X points is great, but it would still require you to purchase $11,000 worth of product or gift cards to earn a Companion Pass. That’s a lot of money to be held up at one time, however, there’s a trick to cut that in half! You could purchase $5,500 in gift cards and earn 10X points then turn around and purchase $5,500 worth of product with those gift cards to earn another 10X points. That equates to 21X points if you include the 1X points you earn from your credit card. That is a slick deal!

It was possible to get up to 25X points using this method, however, I didn’t want to risk it. BigHabitat had a great writeup about this promotion.

2nd Purchase
The next purchase I made, a whole 30 seconds later, was for $2,500. That purchase not only earned me Rapid Rewards, but it also earned me another sign-up bonus (Club Carlson Premier)! This portal deal was conveniently timed with my latest AOR.
Profit: 25,000 Rapid Rewards and 97,500 Club Carlson Points.

3rd Purchase
This was the actual reselling portion of my purchases. I bought 4 – Toshiba Qosmio X74 Laptops for a total of $5,598.65 after a few coupons and tax.
Profit: 53,000 Rapid Rewards (tax does not earn points)

Selling these computers was definitely a learning experience for me. I originally bought them expecting a small loss (~$100 – $200) after Amazon fees, but I expected them to sell quickly. I only chose an item that would incur a small loss, because the profitable items I found were sold out by the time I found out about the promotion. Also, I only had a few hours before it was over so I didn’t look as thoroughly as I should have, however, spending $200 for 108,000 points works out to about 0.18 cents per point, which is a great price-point (pun intended).

I bought these computers hoping to sell them quickly, since Amazon was out of stock and didn’t expect a shipment for 3-4 weeks. Unfortunately, things did not goes as planned. Amazon was priced at $1,299, but since they were out of stock I priced my computers at $1,450, which was just under the lowest third-party seller. That works out to $1,352.61 per computer, after the FBA fees. That works out to a loss of $188.21 or about 0.17 cents per point.

After selling two of my computers right away, Amazon jumped up their restocking timetable. They were officially undercutting me by $151. I wasn’t going to lower my price to compete with them, so I waited it out. After about four weeks of waiting, they finally ran out of stock again and my remaining computers sold that same day!

How to Earn One

There are a few ways to earn a Companion Pass. First, you could do it the expensive way and fly 100 one-way segments in a year, however, I don’t think you want to do that. Second, you could earn points like I did. Here are few ways to earn qualifying points:

Reselling
This was my preferred method, because it was taken care of within a very short period of time (minus the selling part). I suggest waiting for the Southwest portal to have promotions at stores you want to source from. They multiple promos each month ranging from small point increases (1-2 points) to huge increases like the Sears offer mentioned above (8 points). If you’re lucky, you will get a portal bonus that allows the purchase of gift cards so you can double dip through the portal. Make sure that you follow all the rules of the portal, or you may miss out on your points.

Credit Cards
Chase commonly runs 50,000 point bonuses on their personal and business Southwest cards. They are not running those bonuses right now, however, people who have the cards are able to refer you with that offer. You can find people willing to do just that in this thread. If you sign-up for a business and personal card and hit the minimum spending requirement within a year, you will only be 6,000 points away from a Pass. $6,000 is very easy to manufacture, so you shouldn’t have any issues doing that.

If you have any questions regarding the Southwest Companion Pass or reselling in general, feel free to leave them in the comments.