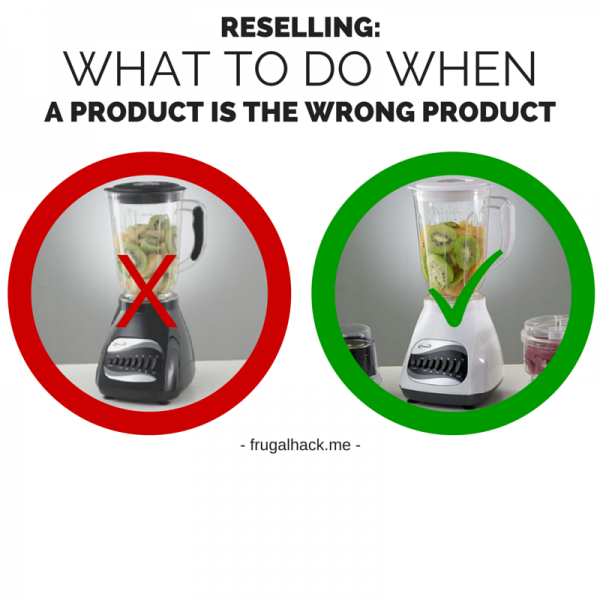 Reselling: What to Do When a Product Is the Wrong Product

Let’s say you found a guaranteed money-making product to resell. No item is guaranteed to sell, but for this hypothetical situation, it is. You end up buying this product right before the holiday season, but you expect a somewhat delayed shipment, do to the time of year. 1-2 extra business days to ship the product would be understandable right? Well, the shipment doesn’t take just a couple extra days, instead it takes five. Yes, five extra business days (7 total days). That seems a bit absurd doesn’t it?

After those two long weeks of waiting, your product does finally arrive. However, when you open the box, it’s the wrong item. It’s the refurbished version! DUN DUN DUN… “Not the refurbished version,” you think to yourself, “This isn’t what I ordered and it definitely won’t sell for the same price as the non-refurbished version!” You then crawl into a corner and use your cat’s tail to wipe the tears out of your eyes. What a sad sad day…

The above hypothetical situation was based on a true story (shocking, I know). Here’s how it really went down.

I bought seven HP 7 Tablets at Staples using a mixture of gift cards, credit cards, reward certificates, coupons, and portals, which would have made these tablets very profitable, had I received the correct ones.

Here’s the one I bought:

Here’s the one I received:

See the difference? It’s very possible that they had the item numbers switched and they were sending out new units when the refurbished units were purchased, but I didn’t verify that.

I contacted Staples after receiving all six of my tablets and explained the situation. The CSR on the phone either had no idea what I was talking about or she had no way to help me. I don’t really know, because she barely spoke english. In the end, though, she did help me out by escalating my case.

Two days later, on a Friday, I received a call from Staples. This time, the customer service rep spoke perfect english, which was a huge benefit, and she told me the returns had been initiated. Great, I thought. I could rest easy over the weekend and wait for the return labels to be sent my way.

Side Note: the tablets could not be replaced, because they did not have any new tablets available. Maybe that’s the reason they sent the refurbs in the first place…

Come Monday, I hadn’t received anything, so I contacted Staples yet again. This representative was similar to the first one and didn’t know how to help or what was going on with my case. She suggested that I email Staples, to check on the status of my returns.

Taking her advice, I sent Staples a short, polite email asking where my return labels were, so I could be refunded. I received an email response about a day later stating that I could expect the labels to be sent on 12/10/14 (this was on 11/26/14). That was unacceptable, so…

I responded to that email with a longer, less polite email stating that I was upset with the service I was receiving and the length of time it was taking for my issues to be resolved. Surprisingly, I received a response to that email very quickly. The response wasn’t from a human, it was a return label from UPS. Coincidental huh?

Throughout the course of 24 hours, I received 9 more of these return labels for the 6 packages I had to return, which was odd. But, what was even weirder, was that I received an email that my Staples order had shipped…even though I hadn’t ordered anything else from Staples. Apparently, they sent me two more refurbished tablets for whatever reason.

Step 5. Call For The Third Time

Everything was kind of screwed up and kind of making sense now, so I called again. This representative couldn’t help me or transfer me or speak english, so this call was really just a waste of time.

I decided to go back to my trusty gmail account and send another email stating that I had more tablets coming my way that I never ordered. They didn’t respond, but I never did receive the tablets in the mail, so I’m assuming the email was a mistake or they stopped the shipment.

Step 7. Send The Tablets Back

Once the return labels finally showed up, I packed up the boxes and sent them back to Staples. This was on a weekend, so I let it be until Monday.

On Monday, I received an email from Staples with my rewards certificates – sort of. I received the email with three certificates in pdf form, but only one pdf had anything on it.

I emailed them saying that only one out of the three certificates had any content. I received an email back very quickly with new pdfs, but one of them was still blank. At least while I waited for a response, I received the money back on my credit card. I was still waiting on the gift card in the mail though at this point.

By now I was an expert at emailing Staples. I told them that I received another blank pdf and I needed a new one. I didn’t hear anything for one day, two days, or even three days, but on the fourth I received a new email with my missing reward certificate. My gift card ended up showing up in the mail a few days later as well, so everything was dandy!

The whole ordeal took about 3 weeks, which was a huge hassle, but that can happen when reselling. Here are a few tips I learned from this:

Private Labeling 101: How to Vet a Product Idea

How I Have a Virtually Unlimited Reselling Budget